“Keep yourself grounded and view the world through your heart. You will find balance.” – Ketut Liyer (via Elizabeth Gilbert’s Eat, Pray, Love)

Well vacation is over, aka back to reality here in Barcelona (which is admittedly not such a bad reality). Damian and I took a 7am Renfe train from Barcelona Sants down to Alicante a week ago today. We both slept the majority of the ride. Upon our arrival five hours later in Alicante, population roughly 330,000, Damian’s aunt met us outside of the train station to accompany us on the bus back to their home. Damian’s family down there were super nice to let us stay with them for the first night in Alicante, as we had already booked hotels for the remainder of the trip. I soon got to meet the family including Uncle José, Emi, Mica, their little brother (which sadly I’m not sure how to spell his nickname), and the family dog, Rocky. Before you knew it, they were treating us to homemade Milanese Napolitano- it was delicious! Later that day, I went out to the town center and did some shopping with Damian’s aunt while the boys played soccer. We all met up in the evening again for dinner with everyone at 100 Montadito’s near the port area.

Friday morning we had a lazy breakfast at their house, before heading to our hotel – the NH Alicante. Sadly after we checked in and did a once-over on the grounds, we realized that the photo of the pool area that they boast on their website was a gross case of false advertising; the rooftop pool, aka the reason why we picked the hotel, was actually no bigger than 5 bathtubs mushed together on the otherwise desolate rooftop. This disappointment aside, the hotel was awesome; hence, we unloaded our things then set out to walk along the boardwalk till we reached the city center. With a population comparable to that of Lincoln, Alicante turned out to be a beautiful coastal city, not to mention walk-able and inviting. We eventually made our way to the 16th-centry Castillo de Santa Bárbara on the other side of the expansive beach called Postiguet. We took an elevator all the way to the top, where the castle then affords its visitors with sweeping views of the city and ocean. After exploring around the castle, we walked around the town center and stopped at a bar for a bocadillo lunch.

Thursday night we invited Mica and Emi over to the hotel, where we made mojitos in the room before heading out on the town with them. We eventually made our way to the old quarter and the area down by the harbor (the Paseo del Puerto), and Mica and Emi were great guides taking us to their favorite places and introducing us to some of their good friends along the way. As Alicante had already started citywide preparations for the upcoming San Juan festivities, the decorated old quarter reminded me of the nightlife area in Lisbon. 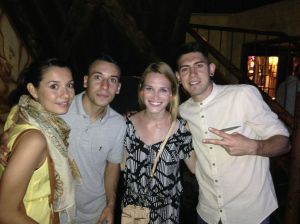 Late Friday morning we packed up our things, checked out of the hotel, and caught a bus to Benidorm. Long story short here folks, the next hotel that we thought we had booked in Benidorm turned out to actually be located in the nearby resort town of Calpe, a little bit further north in the Costa Blanca. Hence, after taking in the grand-skyline of high-rise filled Benidorm, we boarded another bus to take us to nearby Calpe. That being said, once we finally arrived in our hotel in Calpe, the little extra journey was worth it. The hotel was wonderful and Calpe certainly had more charm to offer than Benidorm. So the rest of the day Friday we spent exploring the hotel, the beach (Playa Arenal), and the old town area. Calpe’s most famous landmark is the Peñon de Ifach, a giant molar escaping through the sea and reaching up to a height of 332 meters. 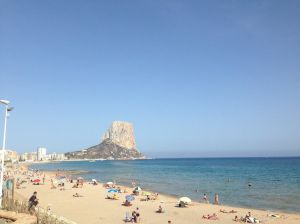 Saturday morning Emi came to Calpe to spend the day at the hotel’s picturesque infinity pool with us. It was a perfectly sunny day; we soaked up direct rays for several hours before retreating to have lunch at a tapas restaurant along the boardwalk. Later Saturday night we had originally planned on going to Benidorm to go out there, but after realizing that the first return bus would not be until 8:30am the next morning we decided against that move, opting instead to give Calpe’s one discoteca a try. The night ended up being a lot of fun; we stumbled upon Calpe’s fashion week happened to be culminating that very night at the Camelon discoteca.

Sunday was a rougher day for the boys so I took advantage of some quality alone time at the pool. I am currently reading Elizabeth Gilbert’s newest work: The Signature of All Things, so I was more than happy to get in some good reading time in the sun. Afterwards, Damian and I walked to Calpe’s Plaza Mayor where they happened to be having a festival of sorts, which involved a dozen food and drink stalls to our pleasant surprise! We got several tapas, a paella, and strawberry mojitos and ate lunch in the shade at a picnic table. Later in the day on Sunday we said bye to Emi and got gelato near the hotel. Sunday night was a nice, relaxing night in at the hotel for our last night of vacation! 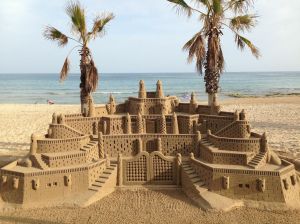 Monday we checked out and took a bus direct from Calpe back to Alicante. That bus ride unfortunately turned out to be a two-hour ride from hell. The bus was poorly air-conditioned, if at all, and I quickly went from feeling fine to being very motion-sick. Damian was great though; he rubbed my back and fanned me for nearly the entirety of the stop-and-go ride while I had my head in a H&M shopping bag. Such is life sometimes. We finally made it back to Alicante and had one last meal with Damian’s family there. Afterwards we took a Renfe train back to Barcelona, getting back to my apartment late Monday night.

Since then, it’s been back to the work grind! I am still nannying for the Henoa family every weekday. I also do several weekend English lessons/ nanny jobs that certainly keep me busy! Thursday marked the beginning of the 2014 FIFA World Cup (aka el Mundial); I am excited to cheer on my teams for the next month – USA, Spain, and Argentina. Last night Cass, Brenden, and I went to Ryan’s to watch Spain vs. Holland. By the end of sad 1-5 defeat, we were very ready to change locations because somehow Ryan’s had turned into a gathering spot for everyone wearing orange. 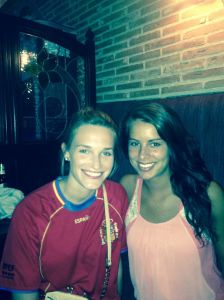 This coming week marks the one-year anniversary of Cass’ and myself moving to Barcelona! We left Nebraska a year ago on June 18th and arrived in Barcelona on the 19th. It’s crazy to think that we’ve already been here one year; it feels like just yesterday we were eating cake at Mar’s celebrating our three-month mark. Equally exciting, Cass’ best friend Larissa arrives in Barcelona for a two-week visit this coming Wednesday. I have been spending more and more time at the beach, slowly progressing from Casper-white to sun-kissed not pale. Cass and I finally got what we had been wishing for the last few months – summer is unquestionably here in Barcelona. It is hot, steamy, sticky, humid, and unrelentingly sunny- all of which makes for ideal beach weather, but rather uncomfortable conditions for an apartment without air conditioning. Fingers are proverbially crossed that we do not perish in our sleep from heat exhaustion! (kidding mom, partly).