Good morning to everyone from this cloudy Monday in Barcelona!

It’s been about two weeks since my last blog post, dang it. The idea of weekly posts is so sexy yet so seemingly unattainable I have come to find. Regardless, some cool things have happened since we last spoke. Namely, Cass’ best friend Larissa arrived in BCN on the one-year anniversary of Cass and I leaving Nebraska to set off for Spain. It is so wild to think that (over) a year now has already flown by! Also noteworthy happenings: Damian and I have been going strong as a “we” for nine months now, the US and ARG are still (knock on wood) in the World Cup, though sadly Spain got the boot rather quickly, and sweet summertime is finally here in all it’s humid glory.

Nothing says hello summer like the celebration of San Juan here, aka the major holiday that falls annually on June 24th (celebrated the night of the 23rd). As Cass and I had already spent two San Juans in Barcelona, we decided to plan our festivities to take place on Ocata beach this year, joining our friends from Sant Cugat. We made sure we were well prepared in advance this time, attempting to leave nothing to chance. Brenden and Damian joined us and we took a train to Ocata, and then met up with the crew the evening of the 23rd. We picked a prime spot of real estate on the beach and proceeded to make the hoguera (bonfire), and set up all of our stuff surround the hoguera. Throughout the night everyone had dinner, drinks, played games, and did fireworks. It was a very successful San Juan; we eventually caught an early morning train back into the city, thank god! 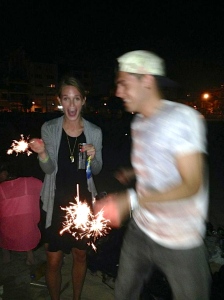 Besides showing Larissa around the city and its hidden jewels, we’ve just been busy working, finishing up our intercambios (they take a remission during July and August), enjoying the World Cup, and getting excited for our upcoming weekend getaway trip up to Bilbao, San Sebastián, and Pamplona. Larissa, Cass, and I will head out on an overnight bus to Bilbao on Thursday night; we will return via bus by Monday night, as Larissa has to catch her flight Tuesday morning (not to mention Lindsay and Maggie arrive that morning as well)! I am stoked to get to re-visit Bilbao after all this time, go to the Guggenheim, and experience San Fermines (running of the bulls) for my fourth time!

Now, some things I have learned after living in Barcelona for over a year: