So it’s 2015. …What?! This spring that means I will be SIX years out of high school, and that is absolutely wild. Pardon my delayed post; December went by in a whirlwind and now I’ve been revamping the majority of the blog in general so this is the final piece of that puzzle.

First things first, since the last post I’ve finished reading Janet Fitch’s White Oleander, Chris Cleave’s Little Bee, and am currently reading Truman Capote’s Breakfast at Tiffany’s. Our book club January pick is Wild by Cheryl Strayed, and I’m also looking forward to my library find: Red Pony by John Steinbeck. On this note, I am planning on creating another new page on this blog solely dedicated to book reviews, so keep your eyes peeled for that addition. Also, I have watched seasons one through three of HBO’s Girls; great content, hilarious predicaments, and relatable happenings.

Apartment hunt update: That chapter was put on hold for now. Not only did we not have enough money to put down four months on a new apartment, but also we realized that logistically it just does not make the most sense for us right now. Side note: it was crazy to see how many scams are out there (on the web) with people trying to get potential renters to deposit money into Western Union or PayPal or Airbnb, etc. before even seeing the space!

Masters update: I am almost done applying to the UPF Barcelona School of Management for a Master of Science in Management with a Specialization in Marketing. I have all of my necessary documents in, now I’m just waiting for confirmation of submission on my transcript and letters of recommendation. Thankfully, they use a rolling admissions schedule and they usually let candidates know their fate in a matter of mere weeks. Prayers and crossing of the fingers would be much appreciated!

December Happenings: On the 4th Damian and I went to the annual Barcelona Shopping Night all along Passeig de Gracía. Cass and I went last year. It’s a festive evening to kick-start the holiday shopping season where the stores are all open later, plus there are fashion shows, lots of DJs, free food and drink, discounts, etc. Another fun holiday outing was going to the Santa Lucia Christmas Market with Jesús; highlight was definitely the suiza (thick hot chocolate with tons of foamy whipped cream).


Of course I’ve continued to nanny for both the American family (Dylan and now baby Ryan), and the Catalan family (Mar and Clara). Ferran, Mar and Clara’s dad, was nice enough to give me two bottles of really nice cava as an early Christmas present. They rock. I’m also still working for the Barcelona promotional venture (though that is now coming to a close) and Family Box. I am thankful to be learning a lot by working for Family Box… Also, quick plug: if you’re busy with a young family and just can’t seem to find the time/strategy/etc. necessary for family devotionals, you should check out Family Box!

I’m still going to the International Church of Barcelona, aka ICB. It is a wonderful ministry and I’ve made some quality new friends there. Mid-December I went to the ICB Women’s Sugar & Spice holiday event, which entailed snacks, testimony, and ginger bread house making.

Christmas: Cynthia and Will (parents to Dylan and Ryan) invited myself and Damian to go with them to Baquiera-Beret (a town in the Spanish Pyrenees about 4 hours from BCN) on a last-minute Christmas holiday! We gladly accepted their invitation and drove up into the mountains with them on Christmas Eve. We pretty easily found the rental house in Salardú upon our arrival in the late afternoon. Once we unloaded the van and got settled into the “ski lodge” we walked down into the village and had tapas at the one open restaurant in the main plaza. It was so much colder there- holy brrr.

On Christmas Day, Cynthia said they’d rather go snowboarding the following day, so Damian and I were free to go skiing! Considering the fact that Damian had never seen snow up until this trip, you can imagine his simultaneous excitement and fear at the now near prospect of going skiing for the first time. After a hearty breakfast, we got all bundled up and the whole crew drove over to the Beret ski resort. Anticipation continued to rise as we got fitted for boots, tried out the skis, and attached lift tickets. 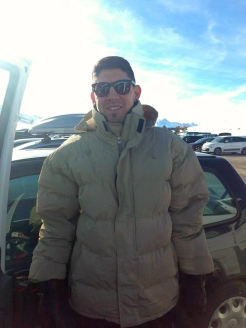 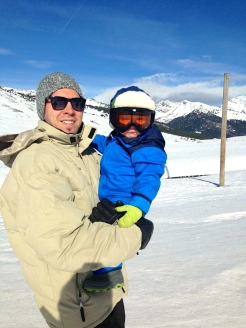 Once out on the actual bunny hill/practice area what have you, Will and I were trying to give Damian some general pointers and beginners tips as to how to stop, turn, and not wipe out. Although Will is a really good skier and snowboarder, I quickly realized that Damian would have greatly benefitted from a proper class before we took to the slopes ourselves, but that was too little, too late.

After the family left to take Dylan sledding, Damian and I spent about another half hour on the bunny hill. While I hadn’t skied in many years, I was surprised at how fast it all seemed to come back to me. Aware that daylight was burning, we decided we’d warmed-up enough and it was ski-lift time! Not recalling how stressful/frightening it is to mount the lift until we were literally on the precipice, I was helped (thrown) onto one of the fast-moving chairs alone with Damian still approaching the loading area. Seconds later I hear the lift operators yelling “Stop! Stop!” and turn around to see that they’ve momentarily stopped the entire lift and that one of Damian’s skis fell off. After a quick dialogue, they help Damian off the chair and re-start the lift.

Less than one minute later, I noticed that I was on the lift that went to the very tip-top of the entire mountain, rather than the one that stops mid-mountain allowing one to ski in the green category area (which is what we had paid for). Perfect. Seemingly a century passed by the time the lift inched to the exit area at the apex. The female worker called out to me, and assisted me to make a much less than graceful dismount from the ever-mobile chair. Finally on my feet, I looked around to notice that there was not another living soul for as far as the eye could see. Nor directional signs. Nor any interest from the aforementioned worker.

Alas, I picked to descend to my left, a decision that in hindsight was less than ideal. As I began to pick up speed, before I knew it I was flying down the mountain and barely caught sight of a passing sign notifying skiers via a blue circle and a black diamond. For a split second I debated stopping, sitting down, and waiting for help to get down, but then just as quickly resolved to ski down without help. Continuing the terrifying (yet exhilarating) solo descent, I wiped out once and thankfully caught myself with my hands. There were also passing signs reading “Slow” near patches of particularly icy spots. Good looking out.

As I got closer and closer to the foot of the mountain, it was more exhilarating and less terrifying. When I eventually (successfully) reached the bottom, I had been assuming to see Damian there waiting for me. I was wrong! He had actually gotten himself onto the other lift, gotten off mid-mountain, thinking that was where I was going to be as well. In the end we found each other about an hour later and the whole adventure was still to fresh to be funny. We grabbed a warm lunch in the resort cafeteria before going back out, right as fresh snow began to fall. All in all, we had a great day!

New Years: In Argentine culture, it’s really important to ring in the New Year at midnight with your family, as opposed to in the U.S. for my age group it’s more of a time to be with friends. That being said, Damian and I rang in 2015 with Mar & Sergio’s family and friends at her parent’s apartment in Poble Nou. It was quite a spread of food, drink, and party trinkets for the little ones. For the first twelve seconds of 2015 everyone stuffed a total of twelve grapes into their mouths, a Spanish tradition said to bring good luck. Later we went out to a Latin club in Eixample with friends.

NEWS: I will be flying home for several months on March 12th! I am very much looking forward to spending time with friends and family, visiting my Aunt Charlotte, and attending bachelorette and wedding festivities!