Happy Monday everyone! Since we last spoke, I am happily all settled into Damian’s in Poblenou. A week ago at this time we were in the midst of the big moving day, but now, thankfully, I’m pretty much as settled in as can be here. So far, so good. Not shockingly, I have really been enjoying the no longer incessant back and forth that was life when I lived across the city in Gracía. Also, I was impressed at how much space Damian was actually able to make for my belongings. It’s been a good first week here and I’m very appreciative of the Obispo hospitality and warmth, like usual.

Since then, we’ve checked out the over-lapping Poblenou festival and the la Merce festivities. On the 24th, the actual holiday of La Merce (the local holiday here that celebrates Barcelona’s patron saint), Damian and I walked to Ciutadella Park to peruse the fountain show, food trucks, and the impressive hip-hop dance show imported all the way from Stockholm. From there we also browsed the expansive wine & cava exposition staked out all the way to the backside of Arc de Triomf. 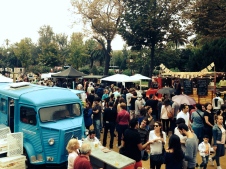 Thursday after work I was delighted to get to make plans with Ben Devries who happened to be visiting the city for a couple days. Gabi, Damian, Rodrigo, and myself ended up meeting Ben and his friends at Le Cyrano for drinks. Later we walked to Bling Bling (don’t mind the name), to continue the night courtesy of course to Aashi Guest List. I had never been there before and it was fun… not necessarily what I had envisioned, but fun. The best part, for me though, was definitely how well the boys all hit it off together!

On Saturday I met up with Ben and his friends again and took them to Marmalade for brunch. Unknowingly/ sadly, they had already dined at Marmalade’s sister restaurant, Milk, but they were all good sports because the food really is delicious. I treated myself with a Bloody Mary (which anyone who knows me, knows that I usually never order, but was in the mood) and Eggs Benedict. Two thumbs up for Marmalade.

Yesterday I ran in my third (second official) 10km race, La Cursa de la Merce, here in Barcelona! The race started in the avenue between Montjuic and Plaza España, made a large loop around the city and finished at the same spot. I ran solo, and I was really happy to have finished in less than my goal time and to have felt pretty solid throughout the run. Damian and April came to cheer me on at the finish line, which was very much so appreciated. Yesterday, also happened to be the 1-year anniversary of when Damian and I started dating… time flies! Later, he surprised me with a bouquet of fresh flowers. It rained all day yesterday, but we eventually ended up going out to dinner for Italian food. It was a lovely day/ weekend. 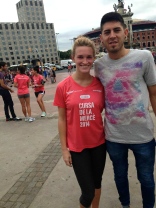