Can’t believe it’s been two weeks already since my last post on here. Yikes, August is flying by! Here’s the latest…

Las festes majores de Gracía 2014 (Gracía festival) officially started by on Friday, August 15th and lasted for the following week. Annually throughout August and September many neighborhoods in Barcelona have weeklong festivals; Gracía’s festival is well known for being the best (in terms of street decorations, creativity, nightlife, etc.). Last summer, Cass and I weren’t really aware of what exactly was happening, so this time around we were amped to participate and have a better idea of the festivities in our area. Although our personal street doesn’t get decorated, many streets very close-by go all out! Once again, Verdi Street won the best-decorated street competition thanks to their “Amazon” theme this year; it was pretty impressive! I also really liked the “Musical” and under the sea themed streets. 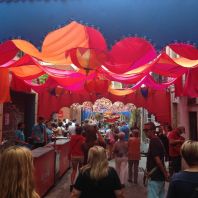 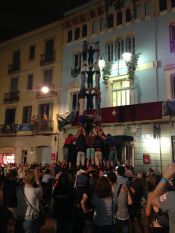 One of the first evenings of the festival, Cass and I went out with Marta and a friend of hers to check out the streets and such (before Marta headed off to Ethiopia)! Saturday afternoon Cass and I had planned on going to a free ceramic workshop in the Plaza de la Virreina. After we had waited a bit for the hosts to get set up, we quickly realized that we would be being joined by half a dozen children and one mom; nevertheless, we stayed and made cute dishes that sadly never got fired in a kiln. Take what ya get I guess. Saturday night, Cass, Brenden, Damian, and I ventured out again to soak it all up and finished the night off with a reggae concert in Plaza Joanic. 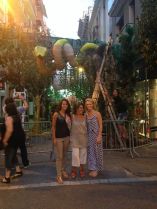 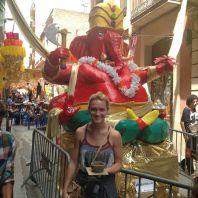 Last Monday evening, Damian and I went to Camp Nou for a non-liga match up of FCB vs. Club Leon of Mexico. Thanks to a new partnership between Damian’s team and FCB, we got free tickets! We made sure we got their early, so as not to miss the Luis Suarez presentation before the game started. It was great weather for a game and I was delighted to have my second Camp Nou experience; plus Barca won – always good!

These last few weeks I have done a decent job of keeping up with running regularly. Looking forward to a few 10k runs in September (including La Cursa de Poblenou y La Cursa de la Merce). I have been trudging along through John Steinbeck’s The Grapes of Wrath… It was kind of hard for me to get into at first, but I now I’m over halfway done and I’m really enjoying it. The Joads sure are a tight squad of folks I would not want to mess with. In other news, this last week we celebrated Dylan’s second birthday! I watched him all day the day before his actual birthday, so we had a fun day celebrating with painting, gifts, cupcakes, and extra time at the park! What a cutie. 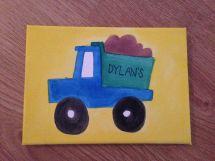 Friday morning I took an express train down to Torredembarra to visit Jesús’ and his family’s place there; Jesús is a friend of mine here whom I met in my language exchange at the local library. He is like my grandpa here and graciously invited me to spend a few days at their apartment in Torredembarra, a small beach town south of Sitges. Friday he showed me around the town, the neighboring town of Altafulla, and their area near the beach. His wife, Marcela, made a delicious traditional Catalan lunch, which we followed up by a much needed siesta. Unfortunately, the weather was not very good on Friday so beach time was postponed in favor of mini-golf with his granddaughter, Anna. Friday night we had dinner at their home due to downpouring rain! 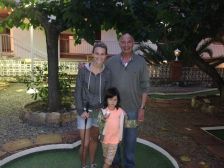 Yesterday morning we got up bright and early to have a good breakfast before heading to Tarragona for my inaugural visit! Back in the times of the Roman Empire, Tarragona was known as Tarraco, aka the capital of the Roman province on the Iberian Peninsula. Jesús expertly led me around the main sites of what’s left of the Roman ruins there – including the amphitheater, the Circus stadium, and the Forum. It was all really cool and not shockingly reminded me of visiting Rome. We also walked around and saw the ancient cathedral and town square, where stopped for tapas before driving back to Torredembarra. After a late lunch and short siesta, we all walked down to the beach for an early evening dip in the ocean. I caught one of the last trains back to Barcelona last night.

Thankfully, this week finally looks like we’re going to get back to good summer weather around here! Until, next time y’all!