Holy tolito does time ever fly! It’s been a packed three-weeks since I last had a chance to blog, so here goes a fat post. July started off with the USA’s sad loss against Belgium in the World Cup. We had a lot of fun cheering on the home team with fellow Americans at the Ovella Negra off La Rambla.

The night before the 4th of July, Larissa, Cass, and I hopped on an overnight bus from Barcelona to Bilbao, where we arrived bright and early at 7:30am. Cass did a good job picking the hostel where we’d be staying during our girls trip for the long weekend- Ganbara hostel was located right off of the Casco Viejo metro stop, aka the old quarter of town. We wasted no time in dropping off our backpacks there and then headed out to catch a bus to Bakio, a small town about a half hour north of Bilbao. Once in Bakio we took another bus further up the coastline, and then got off and started our hike towards San Juan de Gaztelugatxf (that last part is in Basque); for clarification here San Juan is a monastery out on a cool little peninsula that has what looks like a mini Great Wall. The whole area is so beautiful… the scenery definitely made up for the semi-crappy weather.

We walked the whole way back to the center of Bakio and then bussed back to Bilbao.  We were finally able to check-in at Ganbara, cue nap. So later for the night of the 4th we went out for pintxos on Somera Street, a happening street in Casco Viejo that is lined with fun pinxto bars. After a late start to our Saturday, we hopped on a bus over to San Sebastian for some late afternoon beach time on Playa de la Concha. We then bar hopped, ate more pintxos, and got to watch Argentina beat Belgium whilst nomming. 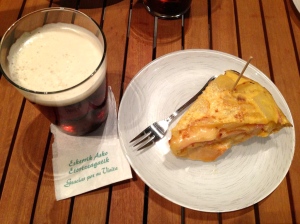 Sunday was a rainy day in Basque country, but we made the most of it by going to the Guggenheim museum after we checked out of our hostel. Luckily, I was able to run into the Cayla Berry in the museums atrium and from there Larissa, myself, Cayla, and her friend toured the museum’s exhibits together. My favorite parts were definitely the Yoko Ono temporary exhibition and the sound and sight room at the end. I was so happy to get back to the Guggenheim since the last time I visited was back in 2010. And it goes without saying that I loved getting to catch up with Cayla- it was like having a lil piece of the big white house with me again! Afterwards, Larissa, Cass, and I got vino y pinxtos one more time before we got on yet another bus, this time en route to Pamplona. 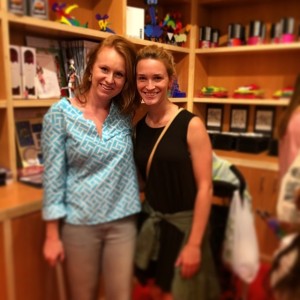 Two rainy hours later, we pulled up to the bus station in the center of Pamplona. For Larissa, Cass, and myself respectively it was our first, second, and fourth time to go to Pamplona for the annual weeklong event of the Running of the Bulls, aka San Fermin. Right away we changed into the standard garb – all white with a red scarf and bandana. Next we stowed our backpacks in the bus station lockers and purchased the standard beverage of San Fermin – Kalimotxos (red wine and coca cola). Some of the more noteworthy staples of San Fermin include a truly impressive amount of trash in the streets, an equally impressive amount of drunk people in the streets, and partying until the morning where you then gather to watch the approximately 7 minute affair that is the actual bull run. In short, we danced, durum-ed, scouted at seats on the railings around 4:30am, and watched the first run of the bulls that would begin the week. 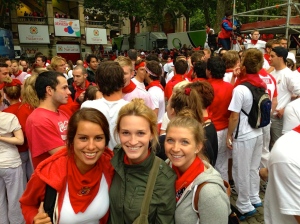 Per tradition, churros con chocolate were had post-run, as well as a very necessary train station nap before sleeping the whole way home to Barcelona. It was a very successful, if exhausting girls trip to northern Spain! That Monday night was sadly Larissa’s last night of her trip, which we commemorated with a pizza party at home. Down time was very short-lived however, as I had to clean in preparation for Lindsay and Maggie’s arrival the following morning!

So Linds and Mags arrived to El Prat on time and with all of their luggage; man was it good to squeeze them right out of the arrivals exit! As timing would have it, I started dog/house-sitting that day so first things first we took care of Apollo and got the girls settled into my apartment. We had a traditional Catalan lunch at La Taberna and then I let the girls sleep off their jet lag while I went to work. Later that evening we met up with Tess Gosda and some UNL friends at Ovella Negra to watch the semi-final match between Brazil and Germany. After watching that shutout we made our way down to Plaza Real and ended up in Jamboree. Very fun first night.

For their first full day here, we walked down Paseo de Gracia all the way to Plaza Cat, toured the Gothic quarter, and explored the Boqueria market. That night we went to the tapas bar on Blai Street in Paralell and then walked to 100 Montaditos nearby to watch the ARG game. It was a boring 90 minutes, but then ARG finally came through with an exciting win. The girls got to meet Damian after the game… it was so good to have them finally meet one another! The next day we all got Boldu pastries for brunch on the go, then took the 6 bus down to Poble Nou for an afternoon at the beach. After work, I went with Linds and Mags to the grocery store to load up on supplies for our dinner. We lovingly slaved away over chicken cordon bleu, au gratin potatoes, snacks, and mojitos before Brenden, Damian, and Rodrigo came over. Dinner went really well and later we eventually taxied down to Plaza Real to get our groove on at Jamboree again.

Somehow we managed to get up just in time to make it to the meeting spot for our day trip to Costa Brava with Excursions Barcelona. We definitely all slept on the 1.5-hour van ride to Playa del Oro in Costa Brava, but once there we were ready to go! This was my second time doing this day trip, as last August Cass and I went with Clare Maney.  The second time around was just as fun; we had great weather for a day of kayaking, snorkeling, and cave exploring. Unfortunately, our group had a few casualties during the day – Damian was quite seasick at some points, and Mags & Linds got flipped over in their kayak while going through a pass with some big waves. All in all though, great day trip to Costa Brava! We were all very happy to get back home and have a chill night in, complete with frozen pizza. 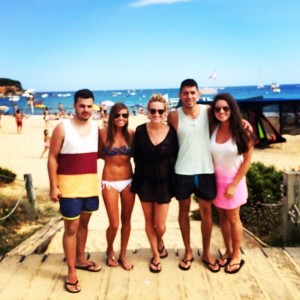 Saturday afternoon we walked through the Borne neighborhood and ended up having a little picnic at Ciutadella Park with some tinto de verano. Afterwards we winded through Barceloneta towards the Champagneria for euro cava and cheese. On our way back to the metro we stopped by Papabubble and got to see how they make artisanal caramels – it was cool and who doesn’t love a free sample!  We had dinner at home and later went out to Opium Mar, a fancy discoteca on the beach. 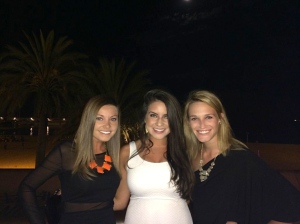 Sunday got off to a late start, but we made up for lost time by doing some power shopping for Argentina gear and Spain souvenirs. We got all ready in our Argentina jerseys and face paint and took the metro over to Damian’s. From there we went to their family friend’s house to watch the World Cup final match between Argentina and Germany.  They were awesome hosts and the night up until the very end was super fun- just not the ending we wanted!

We were up and at em’ Monday morning, starting the day off right with breakfast at Lukamas here in Gracia. From there we walked to Gaudi’s Park Guell, entering for free via the side entrance. I think the girls really enjoyed walked around the beautiful park, especially the view from the cross and stumbling upon a band at the top. After seeing the whole park, we walked back to my apartment and had lunch on the terrace with Damian. Later we ventured out to shop, hitting up BE, Tiger, Brandy Melville, and the Moritz Factory store. That night we attempted to go to Betty Ford’s, but sadly it was closed for cleaning. Thankfully we decided to try a cute place in Raval called Marmalade. Holy yum they had great burgers and nachos! After a much overdue table push-up, we made our way over to George Payne’s- finally an Irish bar to Maggie’s delight!

Tuesday we decided to do some more shopping – the girls were getting lots of cute things for friends and family back home. We worked our way to Bar Lobo, a luminous, airy restaurant off La Rambla at the edge of Raval. They had a really tasty menu del dia. More shopping ensued, and I had to work. Afterwards, we gathered up stuff in preparation for a sunset picnic at the Bunkers. The sunset was gorgeous and we got there just in time as it was really painting the sky. Unfortunately we didn’t stay as long as we had intended because there were A TON of pesky little bugs up there. Nevertheless, you cannot beat the view of Barcelona from the Bunkers. 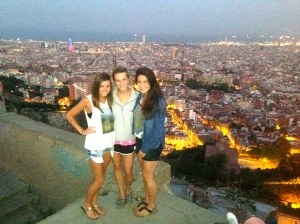 For Linds and Mags’ last day here, we took a train Wednesday morning to Sitges to get in one more quality beach day. We walked around Sitges a bit before plopping down on a spot near the water. Mid-way through the afternoon, we had lunch at the nearby beach café – bocadillos y bravas. By the time we packed up our stuff to leave, we were all a bit fried, Lindsay’s flip-flops busted, and ice water was urgently needed. 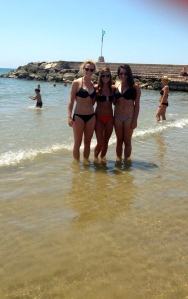 Once back in BCN, we got ready and made it to Da Greco just in time for our dinner reservation.  Per the usual there, the food and wine was delicious. It was fun to celebrate their last night here by saving Da Greco. Afterwards we decided to go to the cocktail bar across the street, Old Fashioned; we all ordered something different and each drink was made with so much care and attention to detail. I had a small-world moment when we realized that the guys who were also sitting at the bar with us just happened to be the owners of POPS, the fabulous champagne bar in Chicago. Before calling it a night, we made a pit stop by Otto Zutz and then walked back to the apartment. 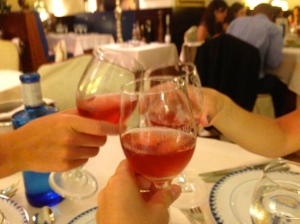 Thursday morning we lugged their suitcases back down the five flights of stairs in my lovely building. As I saw them off onto the handy Aerobus, we had a teary goodbye. It really sucks to see your best friends go… but such is life (or at least right now). Since then, life is settling back into a normal pace. Cass and I switched rooms for the final time yesterday. I’ve loved getting to watch Dylan this weekend.  We are already starting some plans for Brenden’s early-birthday BBQ this Saturday so that should be a good time. My apologies for the novel this time- just lots to recap! Until next time.