“For a seed to achieve its greatest expression, it must come completely undone. The shell cracks, its insides come out and everything changes. To someone who doesn’t understand growth, it would look like complete destruction.” – Cynthia Occelli

Cool quote, no?  Funny how growth means different things to different people.  What does growth mean to you? To me, it means making progress in something, in an aspect of one’s life… Lately to me that progress has been in being more aggressive about reading and living by intention.  Since we last spoke I have been a reading machine… I read Pauo Coelho’s The Alchemist and Markus Zusak’s The Book Thief.  Both quick reads though of vastly divergent stories, these books were both highly recommended by family and friends. Now I just need to see the movie version of The Book Thief, or as it’s shown here in Spain, La Ladrona de los Libros!

Cass and I switched back our bedrooms here in the apartment, aka I’m back to the tiny bed and smaller bedroom. It’s cozy though so all is well, plus fair is fair.  With all of Cynthia’s family in town now, I have watched Dylan and his baby cousin, Adrian, some while the grown ups go exploring in the city. I thought getting one baby to go down for a nap was tough until I tried getting two babies to go down at the same time…Rough stuff people.  On related terms, I’ve started watching Abril daily now that their store, FIFO, is in full swing! So I pick her up from school some days, we have a weekly English lesson with several other little ones, and I run errands for Mar as well.

Two weekends ago now, Cass, Brenden and I took the train to Sitges on Saturday night to celebrate the Carnaval festivities happening there! That night it sure felt like the whole town was partying, alive and loud with costumes, drink, and music. It reminded me of the feeling of the celebrations in Pamplona during San Fermines.

Last week, Damian and I were a wreck. I got a bad cold and his toothache became infected. Thankfully with the help of antibiotics, ice (for him), and Vitamin C (for me) we were better by this last weekend.  Friday, we had Marta over for lunch and more importantly so she could finally see our apartment for herself! As usual, her company was delightful and she gave us advice everything from boys to how to better accommodate guests.

Saturday Damian and I went to the beach at Poble Nou. Afterwards we tried to win big at the casino on the Rambla there but ended up walking out after losing 3 euros. Ha. Saturday night I went to Boujis with Adi… It was a swanky little “pre-Sutton” club near home.  I would say we highly enjoyed ourselves but that would be a bit of a white lie; it was alright, not really our crowd.  Speaking of Adi, big congrats shout out to her for landing a Revlon deal with her modeling agency here in BCN.!!  The two of us finally tried out hot yoga for the first time on Sunday evening. We went to Yogalinda near Vila Olimpica, where the class was comprised of 6 young female students in a room held at a balmy 40 degrees Celsius. The hour-long class was taught in English and we really liked it! Although sadly we were both sore the next day. 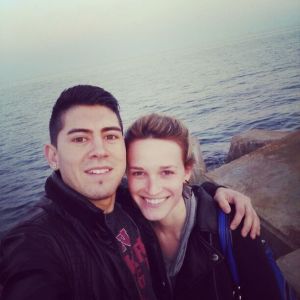 In other news I saw the movie The Heat, which was hilarious. Cass, Brenden, and I have signed up for a 10km race in Barcelona that will take place on the morning of April sixth. Cass and I are pumped as this is the first 10km for both of us! Best part is that it was free to sign up; thank you Corte Ingles. Jank and Patty officially bought their tickets to come visit me in May!! The best is yet to be 🙂