I am going to attempt to be better at posting something at least weekly on here; I know I have gotten a bit slack with my frequency lately. So a week ago today (Jan 5th) I went to Poble Nou for La Cabalgata de los Reyes Magos, aka the 3 Kings Day parade. I forget if I’ve said any of this before, but here in Spain Jan 6th is a big nationally celebrated holiday known as Reyes Magos.  Kids get presents again just like Christmas, especially given by grandparents. The night before is the Cabalgata or parade and then on the actual holiday, no one works and people get together to eat with their families. I met up with Damian’s family and friends at La Biennal, their local spot on the Rambla of Poble Nou, for coffees beforehand and then we went to stake out our spot on the Rambla to have a good view of the parade. The little kids were all so excited; April, Ona, & Bet were busy throwing confetti at one another as the anticipation built. Anibal, Sergio and I caught as many caramelos as humanly possible while the parade went by. It was a great time! After the festivities died down, we went back to Damian’s for homemade milanesa. Yum! 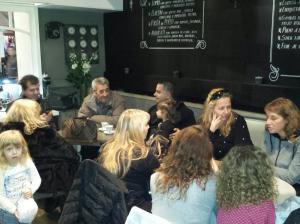 On the 6th we had a good lunch at Damian’s, finished off with a traditional cake that is usually in the shape of a ring. The deal with the cake is that there’s a little plastic King and a little plastic bean both inside of the cake somewhere. Whoever gets the king in their slice is said to have good luck for the New Year and gets to wear the accompanying paper crown; whoever gets the bean in their slice is supposed to pay for the cake. Needless to say, I nearly broke a tooth chomping down on the bean that was in my slice. It was a fun tradition to get to experience with his family.

On the seventh things started going back to routine, namely my intercambio at the library started back up again. We welcomed a new member to our group, Juan Carlos, and he is awesome. He’s from the Canary Islands but has lived in Barcelona for 40 years. He happens to be deaf but speaks great English, and he won me over by complimenting my Spanish. Cass and I ran up and around in Parc Guell, which we’re happy to report that you can still enter the park for free, you just have to pay to sit on the mosaic bench area or go by the very front part. Running on the city streets here has been killing my knees so I think I’m going to look into buying a pair of those little knee support bands.

This last week I met Cynthia and her family, who have recently moved from Seattle to Barcelona thanks to a job transfer.  They have a precious little 16-month old son named Dylan, who I will now babysit everyday this week and ad-hoc in the future. They currently reside in the Poble Nou area so that’s great for me. I’m definitely getting more and more familiar with that area. I even checked out their library branch last week. Speaking of that, I am still trudging through David Copperfield. I am hoping to finish it by February so that I can start Gone Girl finally!

After several flight changes and delays, Sara (Cass’ best friend) arrived on Friday morning. Unfortunately but not super surprisingly, her luggage didn’t come. So far her suitcase has arrived, but they’re still waiting on the suitcase full of Cass’ stuff to get delivered. What a nightmare! Cass and I took Sara out to Opium, Shoko, and Vila over the weekend and gave her a taste of Barcelona nightlife. Sadly, we caved and bought durums on Friday night. We also managed to run into Aashi (a promoter friend) both nights, which was nice. Despite some mishaps at Otto and rain, we had a good weekend; it’s been great to have a fellow NE lady in our midst. 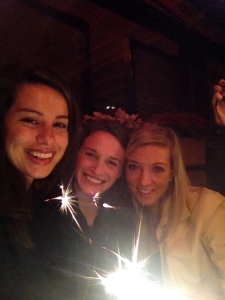