Welcome to 2014, blog fam!  I hope everyone had a lovely holiday season filled with friends and family and all of your favorite things.  I decided to leave the Tumblr world and make the switch to WordPress as it affords free users with more statistics in terms of reader demographics, page views, shares, etc.  I hope you all enjoy the makeover!  Anyways, my good friend Garrett arrived at our door the evening of December 30th – it was so good to get to hug a friend from home after so long! After giving him the royal apartment tour and letting him get settled in, Cass, Garrett, and I headed out for the night; we started at El Cine in Gracía, then walked to Dow Jones, and ended up at Ovella Negra off La Rambla. Garrett loved the final stop and couldn’t stop raving about “the awesome, hidden German beer hall!” Successful first night! On New Year’s Eve, we made quite the day of it by taking Garrett down Passeig de Gracía, Plaza Cataluña, La Rambla, La Boquería, Gotico, Born, the churches, and finally Park Guell.

Post re-charging of the proverbial batteries, the three of us dined at the apartment and got ready to ring in the New Year, Barcelona style! We met up with Brittany, her mom, sister & sister’s boyfriend at Plaza España, where we then proceeded to wiggle our way into a spot in the middle of Avenguida Maria Cristina (aka the large avenue below Montjuic). Once we had made a tiny area for ourselves, we visually feasted on the music show and the people climbers, while we drank cheap champagne and excitedly prepared our grapes. The feeling of being one little person in that huge crowd of people from all corners of the world, gathered together outside to ring in 2014 was… electric, contagious, and joyous. All of the sudden the clock on the big screen began the 10 second count down to midnight; when the clock struck 12:00 everyone cheered, fireworks started going off, and we all started shoving the dozen grapes into our mouths. According to Spanish tradition, one stuffs 12 grapes into their mouth during the first 12 seconds of the New Year for good luck. It was a hilarious moment and for a few seconds I was relatively sure that I was on the verge of choking to death.

After that we took the packed metro over to Vila Olimpica to dance our way into 2014.  The night was great all in all, aside from the buzz kill when my Spanish cell phone got stolen at one of the clubs. In hindsight, it was a rookie mistake that could have easily been avoided; you can never get too comfortable or too confident in a city and that is lesson I continue to learn the hard way. On New Year’s Day, we took the bus up to the Bunkers for a little picnic action around sunset. We were lucky to have great weather and quality company. Later that night, Cass, Garrett, and I went to Cantina Machito for dinner and then took the metro to the Barcelona Casino down by the beach where I quickly lost 20 euros at the Roulette table. You can’t win em all. (For the record, Garrett lost 30 and Cass won 18). 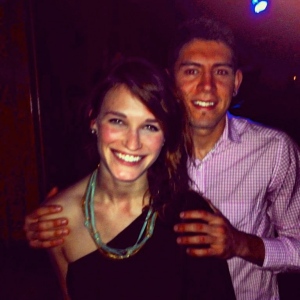 On the second, Garrett took his tour of Sagrada and then we walked down to the Arc de Triomf, through Ciutadella Park, and down to Barceloneta beach for sunset. It was a lot of fun for me to get to take Garrett around and see the city through the eyes of a tourist again. Later on his last night here, the three of us went to Dionysus – the Greek restaurant about three blocks from our apartment in Gracía. We were very pleasantly surprised by the quality, taste, and value of the food and drinks there. I would recommend the cod and Greek beer. After that we stopped by El Gato Negro, Ateneu del Rino, and Ryan’s for cheap beers and some free tapas along the way. Friday morning, I said goodbye to Garrett as he flew back to Berlin; it was so great to get to catch up with him and hear all about life in Berlin.

We had a quiet weekend around here since then – think laundry, dishes, movies, and trying to spend money. With Reyes Magos tomorrow, normal schedules starting back up this week, and Sara arriving on Thursday, we are trying to pinch our pennies and plan ahead currently. Other random updates: yesterday we found out that my mom’s dog, Lucy, is now blind; it was a heart-wrenching piece of news for my family. I was thankful to receive a holiday package from Nina and a Christmas card from my Dad this week.  Last night I got to Skype with my mom & Scott, Hayley, and Beth so that was good for the soul. That’s all I know for now, folks! Cheers!